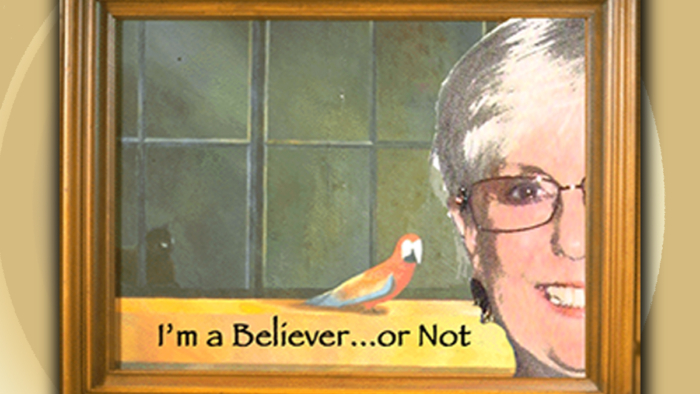 “My thoughts, my beliefs, my feelings are all in my brain. My brain is going to rot.”

There was a time when I believed lots of things I don’t believe now, yet, at the time, they were just as real to me as my un-beliefs are today. I used to believe that I would go to Hell if I didn’t behave and think in certain ways. Now I believe that belief was all the Hell there was.

To Hell or Not to Hell

Three years later, I had finished the Rosicrucian Fellowship’s Philosophy course, and had read Parmahansa Yogananda’s Autobiography of a Yogi. I’d practiced deep Hindu meditations, studied yoga, and finally listened to my mother’s wisdom about the ridiculousness of organized religion.

All that,  totally convinced that I would not go to any horrible place after death. After several weeks of careful planning, I told my man/child husband, Rick, that I was going to visit my mother in Southern California. I stuffed everything I could into three suitcases and  hopped on a plane and escaped from Napa to the San Fernando Valley. After I settled into my mother’s small apartment in Van Nuys, I and called Rick. “I’m never coming back.”

He moaned, and whined, pleading, then demanding. A few days later his mother called me, then his grandmother called me. He called every day, begging me to return. He sent me jewelry, and such as bribes. But nothing would convince me go back to that life—ever! I was free! Or, I believed I was free. How innocent is the simplicity of youthful, idealistic, belief. This was the sixties. I was going to live, be a free-spirit, experience the amazing technicolor of life. Yeah. Right.

With reality setting in a few weeks after arriving in the not-so-amazing Van Nuys, CA, I secured a job as a waitress in the restaurant where my mother also worked. I enrolled in college and was determined to make a good life for myself and live, live, live!

And, “live” I did. I partied like a rock star, and pretty much had an all-around good time. College was easy. My job undemanding, and I had lots of time to feast from the banquet of freedom. Tomorrow? Let it take care of itself. I decided to drop out of school for a while and indulge in the Bohemian lifestyle of the subculture.

Then one night, while sitting in my favorite nightclub, listening to Three-Dog-Night covers from the band, a touch of reality sliced through my beliefs about freedom and living in the moment. I had a stabbing moment of clarity. “OMG! If I continue living like this, I’ll end up like the cartoon on my cocktail napkin— a used-up, floozy-looking woman with too much makeup and a cigarette hanging from her loose, too red lips, a face full of  bags, sags, and crags, and  living on sour pickles and Vodka. NOOOOOO!”

Then fate stepped in. At the time,  I had been dating a colorful Aries man who was going to go for a scuba certification the next weekend. He asked me to go with him. I said, “I don’t know. Sitting there on the sand for hours waiting for you to take your test? Sounds pretty boring.”

“Oh, you won’t be alone. I have a friend coming who will keep you company.” That was Andy’s first mistake. I eventually married his friend—John, a middle class, nice, decent man, with family, roots, tradition. We honeymooned in his Big Bear Cabin.

I was off on a new set of beliefs about my life as a respectable wife. I went back to school, took a job with the Carnation Company in downtown Los Angeles, was determined to settle down and  “be normal.” This worked until I settled into so much boredom I was ready to scream. I had discovered that my beliefs about life didn’t include family, picket fence, and the whole middle class America scene.

Soooo, a belief I thought had been eradicated, sprouted again like a weed. “I need freedom, I need someone exciting, challenging, dangerous. I believe I was born for living on the edge.”

As it happens when beliefs take the driver’s seat, the universe works very hard to fulfill and prove those beliefs. Thus, I met Lee. A Renaissance man. Tall, gorgeous, dangerous, living life on the edge, smart, go-getter, powerful. So, of course, I married him. Soon, I discovered that sexy bad boys aren’t what they are cracked up to be in romance novels. But our marriage was good for a several years but started becoming problematic when we moved to the country in Houston, Texas. He had become controlling, critical, and mean.

One day, after reading about a book about the Peter Pan Syndrome, lightning struck my awareness. “Oh my God!  How did I not know that Lee had this? It’s textbook symptoms.” I was ashamed that I’d deleted so much evidence in my mind, and I realized that I had fallen into the Wendy Syndrome. The worse he treated me, the more I tried to change to please him. But it did no good since he was hell-bent on destroying my self confidence or any sense of me as a strong, intelligent woman so that I would become emotionally dependent on him.

Give me a break, I was a psychologist, master NLP practitioner, and master hypnotherapist. I believed (there’s that word again) that I should have seen this coming. Instead it slapped me in the head like a runaway pinata.

I then believed that I had been hoodwinked. I changed the way I responded to him, talked to him, and treated him. I was rebound my strength, confidence, and regained my self-respect. I left him—flat. He begged me to stay for a while, plied me with gifts and promises. This was what had worked for years when he sensed I was on the verge of leaving. It didn’t work anymore. Then, be became mean, ugly, accusing, and threatening.

One day, while he was at work, I had a moving van come in and pack up the house. I put everything, except a chair, a side table, a lamp, and a bed into storage. I would have loved to have seen his face when he came home.

And Now for Something Completely Different….

Beliefs. How they can help or hinder. I prefer those that help. Anyway, after leaving Lee, I  believed that I wanted someone in my life who was sensitive, poetic,creative, funny, smart, blah, blah, blah. Again the universe was accommodating and I became more involved with a friend, David. We had a tumultuous relationship. It was a ride at a Six-Flags roller coaster. Higher than high with adventure, fun, laughter, and love. Then a fast slide into nightmare-land, only to swing upward again.

Well, by now you know the drill. My beliefs changed and we parted. We are now best friends because I believe that a little thing like divorce shouldn’t stand in the way of having a great friend.

stand in the way of having a great friend”

A Keeper Comes Along

Finally, I think, the “right” beliefs took root in my confetti-head brain. I met someone who, for once in my life, was low maintenance and a perfect match. Yes. I married him too. I am a tough one to live with, partly because I don’t hold onto beliefs. Beliefs are the filters we use to drive our life. They need to be open and flexible in order to make it through with the least amount of misery and the most amount of wonderfulness. At least, that’s what I believe about beliefs.

Choosing beliefs takes a bit of know-how and practice. I’m so glad I have the skills to know my beliefs aren’t real and know that they can be changed when needed. Even still, beliefs are tricky. They don’t want you to know they aren’t real. Shhhhh. We know the secret. They are just energy, synapses forming and unforming, chemistry to help us navigate the shark infested waters of  life.

Some people turn to religion for this. Give it all over to God, Jesus, Buddha, Alla. Oh wouldn’t life be simpler if I could buy into that one. But my universe doesn’t support that kind of belief when it contradicts all my other beliefs. Even if they aren’t real, or maybe because they aren’t real, I choose beliefs that include oneness, love, choice, and peace in all of us at some level. I still have, as Ram Das put it, “uncooked seeds” but at least I know they are there to be cooked.

I must have a belief in marriage. I have married multiple times. I don’t believe marriage is necessary. I’ve never really gone out seeking a partner. They just always landed on my doorstep. Well, I hope I’m through with that circus. I’m happy in my belief now that I’m just where I belong.

At the time of this writing (2022), Allen and I have been married 23 years. It’s been sublime and challenging. Just what I need.